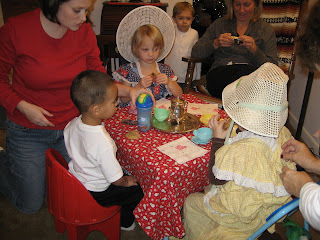 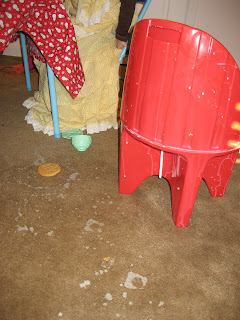 We headed to West Plains to be with the Merriman clan for Thanksgiving. While we were there Olivia and Ella had a grand tea party. Kingston joined the party only to prove that boys should NEVER be invited to a tea party (his mom is the one that made that statement). He sort of fell out of his seat but grabbed the tablecloth to catch his balalnce. The second picture is the aftermath. That is his straw stuck to the back of the chair... Oddly enough the girls did not seem to mind too much. 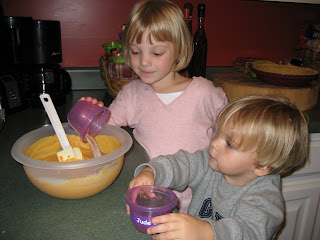 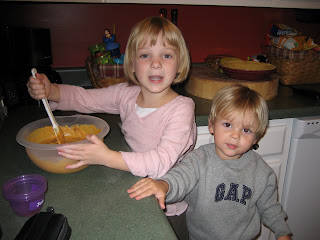 The kids and I made Jonathan a pumpkin pie for his birthday. It actually turned out pretty good. I made sure there were no "special" added ingredients - you never know with Jude. He likes to pass out boogers. 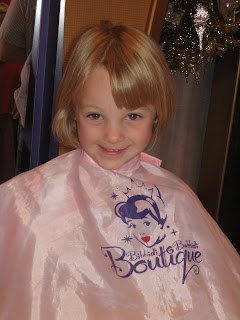 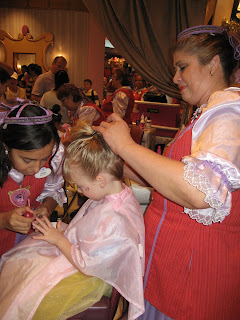 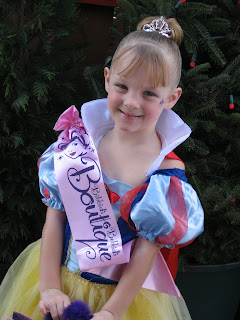 Before we left Ella hit the Beauty Salon - Bippity Boppity Boutique. She picked out her nail color, lip gloss and make up. It took A LOT of hairspray and gel but the "fairy godmother" managed to get her hair in a bun. After dousing it with glitter (fairy dust), she was ready to make her appearance and a transformed princess. Oddly enough, makeup, dress, nails and a tiara can change someone's attitude. She had wonderful manners for most of the rest of the day. Now if we could get those results without all the makeup and glitter!

Dr. Keith called today (he called yesterday too but I was in the Lion King and could not hear him). He said although the EEG was good they want to go ahead and plan the MRI. The nurse called me back and they scheduled it for Dec 2. at 11:30 which is a Sunday morning. He has to be sedated so I am really not looking forward to that. Maybe this will answer any questions. He also set him up an appointment with the Pediatric Neurologist for January 14th. I really don't know what that is for though.

Today was an interesting day. Uncle Joe left EARLY this morning and we sort of took it easy. We went swimming, let the kids nap (adults too) and then off to MGM - again. On the way there was the interesting event. We were rear ended by a Disney bus - driver in training. He pounded us pretty good. Nobody was hurt but we held up traffic for a while and the driver in training will probably never make it to driver status! Also, our room overlooks a pond and today we saw and otter AND an alligator! The most interesting events did not involve Mickey at all. We did have fun at MGM though. 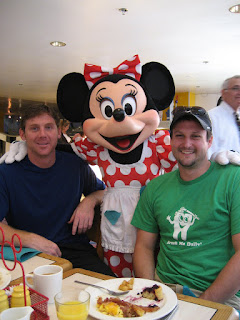 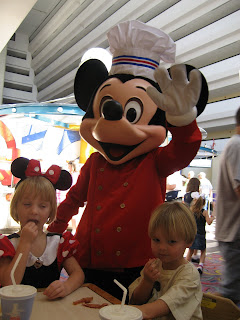 This morning was our special breakfast....Here are a couple of pictures. Afterward we hit Animal Kingdom. I am too tired to elaborate. 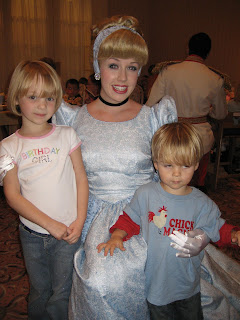 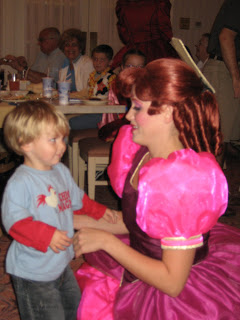 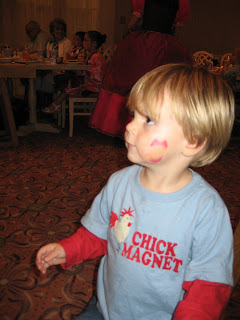 Last night was our big meal with Cinderella. I am not sure if Ella or Jude had more fun. Of course Ella loved seeing Cinderella and Prince Charming but was not so sure about the Wicked Stepmother. She stayed true to her character and Ella had on her Birthday Girl shirt so she asked if today was her birthday. When Ella said no she said she was a liar. I thought Ella was going to cry on the spot. Jude did make a friend with Anastasia. He danced with her and she gave him a big kiss. He had his Chick Magnet shirt on so she asked him if he was a chick magnet did that make her a chick. All he could do was shake is head. Apparently he is attracted to the "bad girls"....we are in for it!

Last night we made it over for the big Christmas Party - it was crowded! We did get to see the show in front of the castle, the Christmas Parade and the big fireworks spectacular with special guest Tinkerbell that ziplined through (I think she does that every fireworks show but Ella and Jude loved it). Afterwards we went and rode Dumbo, Snow White (again), Peter Pan and It's a Small World. By that time it was 11 and Jude was asleep so the adults went over to Space Mountail where there was no wait. When we came out Ella was asleep (lucky for us my mom does not like roller coasters and watched both kids) and we headed on out. It was alot of fun but I think we wore them out. They both wore their costumes but had decided on pjs by the time the fireworks were on. Today we have an early dinner with the princesses at 4:00 and the boys (Jonathan and my brother) don't feel like going to Animal Kingdom so we are giving them the day off. We will do the dinner tonight, breakfast with Mickey tomorrow and Animal Kingdom tomorrow night. Those are the tentative plans anyway so we may adjust!

Or at least his EEG results are. I just spoke to the pediatrician's office and everything was fine. His pediatrician won't be in until tomorrow and I am supposed to call back to see what - if anything - is next. Yeah Jude - he PASSED his very first test!

They are napping now and then we are heading over for the Very Merry Christmas. Mom and I took them swimming this morning and they have 3 barrel slides that run into the pool. They both went down them and I really wish I had video. They shot out of the slides like little bullets! It was pretty funny - after the second launch Jude would not get back on.... I went down too but would prefer no video of that! 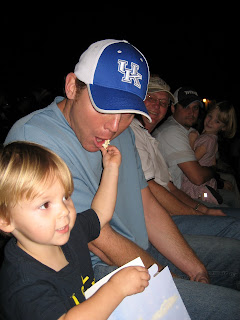 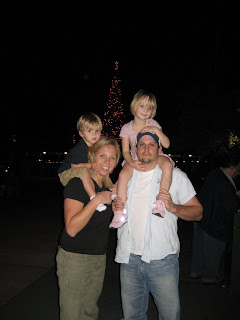 We got a late start today due to church, lunch and naps. Our plan was to head to Animal Kingdom but when we got there we had 30 mins until close. We revised the plan and headed to MGM. We had great timing. As soon as we got there I headed to the Aerosmith ride to get fast passes. Then we did the Tower of Terror and straight to the Beauty and the Beast show. Right afterward we got seats for the Mickey. Ella, my dad and I went to ride the Tower of Terror again - that's right, Ella on the Tower of Terror. She liked it but will not ride again....according to her. Then we saw the Mickey show where Jude shared his popcorn with Uncle Joe then off to Aerosmith. We called it quits after the ride. The kids are still tired and so are we. We have a late night tomorrow night with Mickey's Very Merry Christmas Party from 7 until midnight! 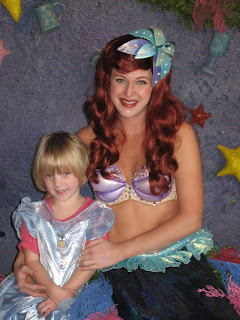 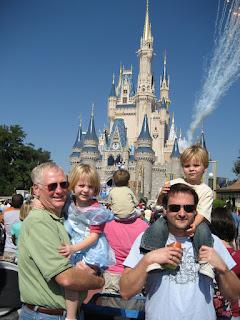 Well, we made it and today we spent our first 8 hours at "The Happiest Place On Earth". There were a few moments when I felt like we were in the busiest, craziest, cryiest (if I could temporarily make that a word) place on earth. It was a blast though. We watched a show (we watched it twice according to my brother) at the castle which had several princesses, Peter Pan, Captain Hook and Mickey and Minnie among others. We also rode Snow White, Pooh, Buzz Lightyear, the race cars and watched Mickey's 3D and the Monster's Inc. Laugh Floor. Everyone was worn out and now the wee ones are sleeping and the big ones are about to do the same. Oh yeah, another highlight was Ella getting to have her picture made with Ariel!!! Here are some pics to prove it - more tomorrow....we have 7 days of fun! 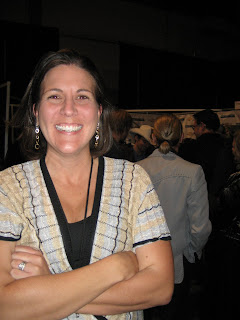 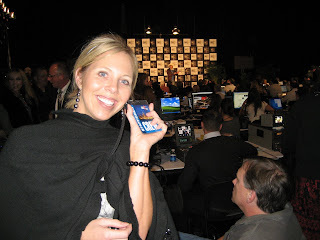 I just spent 20 mins on the Top 10 Reasons Carmen and Amy should NOT be granted All Access passes to the Country Music Awards. However, my computer went down and I lost it. It is really late so I will save the details... I will let the pictures of the two Desperate Working Houswives speak for themselves. Sandy (whoever Sandy is) had just better be glad that she did specify that we NOT go in the greenroom because we went EVERYWHERE else! And yeah, that is Kenny Chesney.

Okay I found them but keep in mind it is late so they are really not funny...
10.) We have nothing to wear.
9.) If streets are closed off downtown we might get confused.
8.) We WILL take food from craft services
7.) ....which means we will drink from Chick-fil-a styrofoam cups during the awards while on the floor level (eating pretzels, too).
6.) I am not ashamed to take pictures of the stars with my cell phone even though no pictures are allowed - although Kimberly Paisley may think I am a stalker.
5.) Carmen is not afraid to run into Jessica Simpson - she did stop herself in time.
4.) We will sit in any empty seat.
3.) All Access means we can hang out in the media room - they did say all access.
2.) I am willing to tell anyone congratulations on their awards - although I may embarrass Carmen.
and finally....
1.) We WILL be rude and ask Kenny Chesney for a picture!

one more - We should also not be allowed all access passes because we stay out way too late and we will stay up TOO late typing on our blogpage.

As you can tell, Phillip scored us some passes to the show. It was so much fun. Instead of all access passes it should have been called too much access passes. We probably will not be allowed back!

One more side note is that behind both Carmen and I in the other pictures is Brad Paisely - that was our attempt to get our pictures made with him without asking...it didn't work out so well! 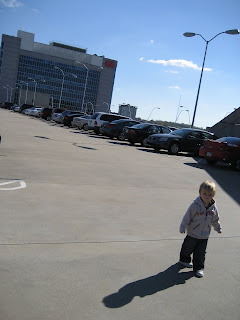 Here's the picture.... Most probably know that Jude had another seizure on Saturday night. Of course after it was all said and done he was indeed running a fever. It was a bit different this time in that he did not convulse, he just collapsed down (in Wal-Mart no less). He is doing great. They did refer him to a Pediatric Neurologist and told me that he could probably get an appt. at Centennial within a week and get one with Vanderbilt in about a month. The pediatrician called me yesterday and said they had set it up - Tuesday (which is today) at Vanderbilt. I was relieved since we are leaving for Disney on Friday. He had his EEG today and did fantastic. I could not have programmed a robot to be any better. He endured having to get up at 4:30 (so did I by the way), holding still while they exfoliated and placed electrodes on his head, wrapped his head like a mummy, had him open and close his eyes, stare at some lights, blow a pinwheel for 2 mins (which is a 2 year old record by the way) and then to top it off he fell asleep on command (waking at 4:30 will do that for you). I was very proud of him. He was only allowed to sleep for 5 mins then I had to wake him up which was VERY hard. He left happy after all was said and done and is still napping (it is 5:00 pm). We don't know what the results are yet. Ella requested that I take pictures. I only got one of him on the parking garage in front of the hospital that I will have to put on later. I was too embarassed to take the camera in for documentation for my 4 year old.