I have pictures to document our long weekend road trip but will have to put them on later. It began after a long week of the stomach virus. We left out on Wednesday afternoon and about an hour and a half down the road I heard " I think I dookied my pants" from the potty-trained child in the backseat. That is never a good sign. We stopped at a rest stop to fix everything then headed on to Memphis. A brief pit stop at Graceland, a bag of Skittles later and we were headed off to Little Rock where we stayed the night with Kevin. Ella had a great time staying up late, playing with the dog Emma and watching Food Network learning exactly what cheeseburger fries were made of (garbage according to her). The next morning we headed on out for Branson where once again the dookie pants phrase was uttered....she was right - again. We did arrive in Branson where we met up with Mimi, Pops, Jamie, Chris and Kingston for a fun and ice cream filled afternoon of shopping. We then hit the Branson Belle for a little dinner show (which the kids - adults too - really liked). We stayed in a great cabin there and the next morning hit Silver Dollar City where the adults discovered that we do not have iron clad stomachs as we once did and a few little rides can make you feel like you have the stomach virus all over again. The kids had a great time riding every animal ride they had to offer - over and over again. Thankfully, the rides did not induce the dookie effect. We did the Butterfly Palace the next morning and a little more shopping that afternoon before heading back towards Little Rock that evening where we stayed the night with Lindsay. We had dinner at Izzy's in Little Rock and the kids scored free t-shirts from the owner for us to take their picture and send it back to him for the "wall of fame" in the restaurant (they were so tired from our trip they were being good). Ella received a much needed pedicure and manicure from Aunt Lindsay and the next day it was back to White House. Now we need a nap!

Baby Girl - and elevator rules all parents should know

We took a very exciting trip down to Bapist Hospital on Sunday afternoon to meet our friends Mark and Jessica's new baby girl. (Which I still have not gotten word on the name yet - for sure.) She is beautiful. Ella was thrilled with someone "finally" having a girl because "I like girls." Jude gave her one "awww" and was off wooing the nurses in the hallway. We loaded on the elevator and headed to the 3rd floor (from the 7th) parking garage. Jonathan had Jude and apparently that left me in charge of Ella. I got off the elevator and as I entered the garage turned around to get her hand. She was not there but it only took a second - and about three paniked screams from Ella - to realize she was still in the elevator with the door shut. I hit the button and she came out but through the crying we had to establish "Elevator Rules". If, by chance, you get shut in an elevator alone, DO NOT GET OUT! Not really something we had thought of before.....

Well, for those of you that don't know, we withdrew our offer on the house because the person that wanted it decided she wanted it regardless. As it turns out, she called Jonathan on Friday and offered to sell it to him. Apparently she is an agent and had the husband buy her the house so she could then turn around and sell it. We told her thanks but no thanks....so we are still looking.

Well, I had a very exciting post and picture to go with Jude and his big success of #2 on the potty - 5 times in a row actually....impressive really. He was very excited to receive a Spiderman toothbrush out of the deal. However, it was trumped by the onset of a stomach virus later into the night and then yesterday he scared his Mimi, Pops, Mom and Dad very much by having a febrile seizure. I was completely unfamiliar with this but apparently it happens to about 1 in every 25 young children, is hereditary and as the name suggests is brought on by a quick change in body temperature. Of course it does not feel normal as a parent (or grandparent, I am sure) to see it happen. Luckily for me I was not there and he was in great hands with Mimi and Pops. They called 911 and he was checked out and determined that he was okay. His pediatrician also reassured us that it was common and due to body temperature change. Nana and Pepaw quickly made the drive from Mayfield to White House to see for themselves that he was fine. By 5:00 that evening he was outside taking a ride in the Barbie Jeep and running around chasing a ball. God received many prayers for that little turkey yesterday! 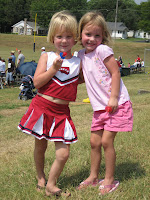 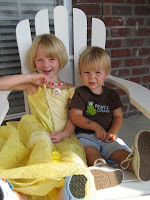 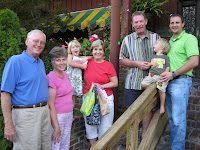 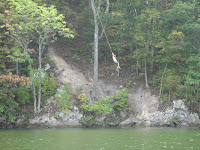 Well, I seem to have gotten a little behind. The kids are off visiting this week. Last week we met my parents, Aunt Brenda and Uncle Kim at Patti's to celebrate Mom and Brenda's birthday. Ella and Jude went to their house until Labor Day when Mimi and Pops picked them up and now they are spending a fun filled week in West Plains. The first picture is of Ella and Riley at the ballgame - we are going to be in trouble with those two....The next picture is Ella and Jude at Princess Riley's birthday party the same day. The next is at Patti's and then the last is Jonathan swinging from a rope swing in Rockwood, TN where we spent the weekend with our friends Jay and Amanda. Jonathan caught his toe on the rope and we all saw his life flash breifly before our eyes but he managed to get it unhooked and hit the water safely. I say as long as it was not his hand....then we would be in trouble!